Theophil Lamy was "the second builder of our glorious Dome" 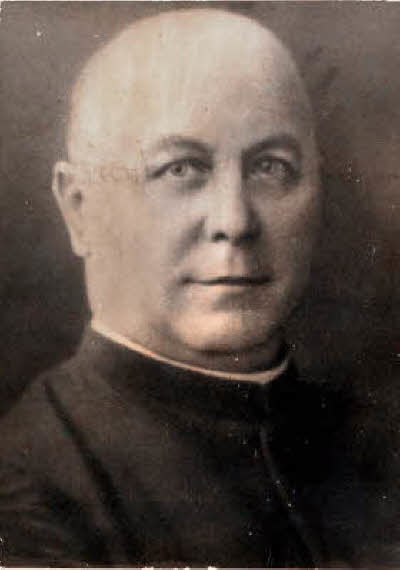 In 1905 Lamy, the parish priest, came toSt. Blasien.
Even today he is not forgotten / accompanied into the Dome with the bells ringing and the cannon firing

In St.Blasien as a matter of course one speaks about the "Theophilus-Lamy-House", with kindergarten and centre of the Catholic parish  “St. Blasius." And many who pronounce the name of this house do not know who he was : this Theophil Lamy, parish priest of St. Blasien, from 1905 to 1936, he died here in 1938, his tomb is still preserved in the cemetery.

A hugely popular man of whom many people still have good memories. That 37 years after his  death the new parish centre was named after him, speaks for itself. On the occasion of the 25th anniversary of his priestly ordination in 1922, Lamy was nominated  honorary citizen of St. Blasien . "Second builder of our glorious Dome" it said on the document, which reiterated that it was due mainly to the efforts of Father Lamy that after the fire of 1874, the rotunda of the Dome was rebuilt from 1910 to 1913.

There were three priests in 1905 in St. Blasien.  After eight years of parochial activity, Father Julius Popp was transferred to Lahr on 1st March. A Father Zobel came to St. Blasien as  his replacement  and very quickly enjoyed great popularity. There was lack of understanding in the parish, when it became known as early as November 1905 that delegate Zobel had to leave St. Blasien because the application list included longer-serving priests who were given  preference. " The most Reverend Theophilus Lamy, presently delegate of Waldkirch, was transferred to the town parish of St. Blasien by His Royal Highness the Grand Duke," one could read then.

On Sunday 3rd  December, there was  the investiture of the new parish priest, who was led by church bells and cannon fire from the parsonage to the church. The Dean of Dogern, Dieterle, who was also member of the Centre Party of the Landtag (parliament) presided the inauguration. After the solemn High Mass, during the secular celebration in the "Hirschen"  the Member of the Landtag Dieterle expressed his hope that a railroad to St. Blasien would soon be built. As a deputy he wanted to stand up for this idea anyway. Although Dieterle was dean of the deanery of Waldshut based in Dogern, he was MP for the constituency of Eberbach-Buchen in Northern Baden. The new priest Theophilus Lamy, born in 1871 in Furtwangen, immediately undertook the task of rebuilding the Dome.

On 30 August 1907,  Lamy took the opportunity of a visit by Grand Duke Friedrich to apply  for the church building. And the Minister President  told the priest: "It will be all right." It was the last visit of the Grand Duke to St. Blasien, he died on 28 September 1907. Disappointment in St. Blasien, as in December 1907 came the news that in the budget of the Land 1908 no funds were provided  for the rebuilding of the church. The parish and the associated municipalities of St. Blasien, Häusern, Blasiwald and Schwarzhalden submitted a petition to the (Landtag) Parliament, written by Father Lamy.

Now is also the dean and deputy Dieterle mobile again. On 11 June 1908 a group of bored enlisted member for the said railway construction in St. Blaise and Dieterle here for the cathedral. Thus, the cathedral began to roll, the driving force again and again pastor Theophil Lamy.

Pastor Theophil Lamy had worked as a builder and in stores

In 1905 he came to St. Blaise / Even as a writer, he has made a name / His concern was always the simple people
As a Pastor Theophil Lamy in November 1905, pastor of St. Blaise, the communities Blasiwald and houses also belonged to the parish. Often the pastor walked up to the neighboring villages in order to keep them in the local church and chapels of the religious school hours. On major festivals, such as the "Saint Fridolin" in houses or the "Panthaleonsfest" in Blasiwald, was the pastor of St. Blaise in the coach picked up.

In St. Blaise it was Theophil Lamy first for the restoration of the cathedral. He knew how to convince the authorities and builders, but also their own community. The Spendenwilligkeit St. Blasier, Blasi Walder, who was Häuserner and those from black and dumps enormous. At a meeting in Karlsruhe House of the Estates, on 7 May 1912, raised the finance minister of Baden Rheinboldt stressed the sacrifice of the parish particularly. The parish took over the cost of the paintings on the ceiling, two altarpieces, of the 14 Stations of the Cross, and other items of equipment. A great day for Father Lamy, as on 1 June 1913 by Archbishop Thomas Nörber the church could be consecrated. Lamy was awarded the Order of the Zähringer Lion.

The history of the monastery of St. Blasius Cathedral, especially the work to restore, as well as the veneration of St. Blaise, gave Father Lamy, in a "St. Blasius book" fixed. Later, he also wrote another biblical novel, and he was also the author of "Blaise solemn play," which was performed in thirty years at St. Blaise.