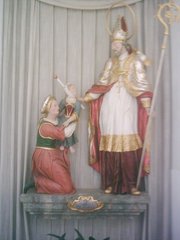 Completed and inaugurated in 1783, the church dome of St. Blasien is dedicated to St. Blasius, the early Christian bishop Blasius, who is also the patron saint and namesake of the political municipality of St. Blasien in the Black Forest.

St. Blasius (Church festival on February 3, and in St. Blasien the following Sunday) is and will remain, all in all, a stranger. Seen from the Black Forest, he lived in the far distance, due to the lack of evidence, his life eludes a thorough description, and even his name denies interpretation.

Blasius is a male first name inherited from Latin, whose meaning is unclear. This onomatopoeic name just popularized that Blasius who was chosen as an Armenian martyr bishop of Sebaste (now Sivas / Turkey) for also being worshipped in the Western Church.

Ranked among the 14 helpers, according to tradition, Blasius spends his life, first as a popular and helpful doctor who is also assisting animals in need, in Lesser Armenia ( formerly Cilicia in modern Turkey). The knowledge about his active life is limited to this not even fully secured knowledge. Conversion to Christianity and his mission as "parish warden" (= bishop) marks a crucial turning point in his life.

Due to the new outbreak of persecution of Christians, under Emperor Diocletian (284-305) the parish members fear for his life, and encourage him to hide in a cave in which he is tracked down by the captors of the Roman governor Agrikolaos. In the dungeon, according to the legendary tale, Blasius saves the life of a fellow prisoner boy who threatened to choke on a swallowed fishbone .

After much torture Blasius was beheaded in 316. Prior to execution Blasius prayed that all who have an evil on the throat or some other infirmity, would find their request being heard when they asked for recovery in his name. A voice from heaven granted the request. With his death as a martyr, Blasius becomes the pre-eminent witness of faith of the Armenian Christians. Since the 11th century, on 3 February, with two burning candles, which are held in the form of the St. Andrew's cross, the Blasius blessing is given with the words:
"Through the intercession of martyr bishop St. Blasius be preserved from disease and suffering by the Almighty God, the Father and the Son and the Holy Spirit. Amen. "

A contemporary view of prayers also recommends Blasius as the patron saint against the risk of rapid, inappropriate and especially offensive words, which, for the maintenance of peace, with the help of the Holy Blasius should not leave your mouth.

And jokingly (with a core of truth), the Blasius blessing is considered by one or other as the "eighth sacrament" - as an annual replacement for being reluctant to receive the real sacraments.