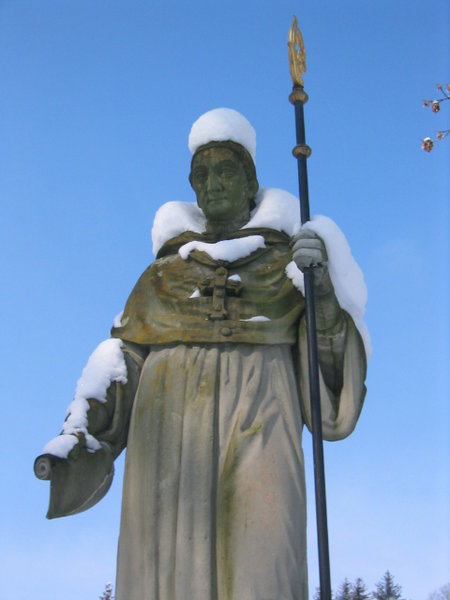 Martin Gerbert on a monument of 1856 in the Bonndorf Martinsgarden

Abbot Martin Gerbert (actually Martin Gerbert of Hornau, *12 August 1720 in Horb on the Neckar, † 13 May 1793 in Saint Blasien) was an eminent music historian and representative of the early modern scholarly Benedictine culture in the Black Forest.
Gerbert was descended from the noble family of Hornau and received his early education in Freiburg / Br. In 1736 he became a monk at the monastery of St. Blasien, where he was a teacher of theology. He travelled to Germany, France and Italy. He collected materials for medieval liturgy and music history.
On 15 October 1764 Gerbert became Prince-Abbot of St. Blasien. Under his rule, St. Blasien became an important centre for historical research methodology. He defended himself against the Josephinism of the Austrian sovereign, published his three-part Historia Nigrae Silvae (1783-1788). Gerbert, then undertook to write the Germania Sacra, a description of the dioceses in Germany. His interest in music led to acquaintance with Christoph Willibald Gluck, who became his friend.

After the disastrous fire of 1768 Prince-Abbot Martin Gerbert had the famous round church of St. Blasien built (until 1783). In 1791 the Prince-Abbot founded of St. Blasien, the Rothaus brewery - now "Badische State Brewery Rothaus" - as a measure to stimulate the economy in his Black Forest territory.

As Gerbert was initially entrusted with the administration of the monastery library, he began to study church history. The special object of his research was the history of church singing in the Middle Ages. He subsequently became one of the most important music historians of modern times. On the above mentioned travels in 1760, he collected copies of medieval tracts on music history and theory of monastic libraries. In Bologna, he became friends with Padre Martini, and both shared their rich experiences. The first result was the travelogue Iter Alemannicum .... This was followed by the important work of De ... cantu,Monumenta ... and finally Scriptoresecclesiastici ... The last book - a comprehensive collection of sources in three volumes - comprised the major music theoretical writings from the 3rd century to the end of the Middle Ages and, in the aftermath, was of the utmost importance for the study of medieval music history.

The former grammar school in Horb, the Martin-Gerbert-Gymnasium, was named after him and in St. Blasien the primary, secondary and intermediate secondary school (Realschule) is called Fürstabt-Gerbert-Schule.

From Wikipedia - the free encyclopedia