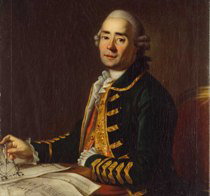 Pierre Michel d'Ixnard first worked as a carpenter, but also as a bricklayer, mason, mechanic and mirror-maker and was trained by the Parisian architect JF Blondes. He followed his teacher, Jean Servandonis to Stuttgart in 1763. In the same year the Prince of Hohenzollern-Hechingen gave him his first stand-alone application, the conversion of his residence in Hechingen.

This work earned him a reputation as a master castle builder in the Swabian Königseggwald, where he built the castle of Königseggwald for the count in 1765. For the Elector of Trier, he planned the Electoral Palace in Koblenz (1777-1780). Furthermore, he also oversaw the renovation of the castle of Ellingen (1772-1775).

In addition to the royal residences, d'Ixnard made his mark as an architect of churches and monasteries. From 1767-1776 he worked mainly for the convent of Buchau, where he built the convent buildings and the convent church.

Among his greatest and most famous works is the monastery church of St. Blasien. From1768 to 1783 d’Ixnard built the town church and collegiate and abbey church of St. Jakob in Hechingen, from 1782 to 1784 the parish church in Wurmlingen near Tuttlingen. His transformation of the presbytery in the cathedral of Konstanz is highly controversial to this day.